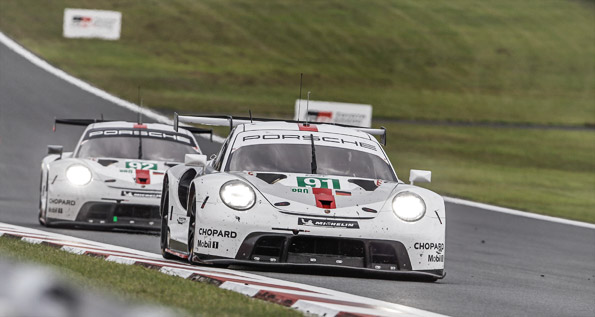 Stuttgart. aims to defend its lead in the manufacturers’ classification of the FIA World Endurance Championship at round three of the season. The factory squad tackles the four-hour race in Shanghai (China) with two of the latest generation ca. 515 hp 911 RSR. After clinching a one-two at the season-opener in Silverstone (Great Britain) and a podium result at the second race at Fuji (Japan), the GT Team is now eager to perform well again at the Formula 1 circuit on the outskirts of the Chinese commercial metropolis of Shanghai. In the GTE-Am class, three customer teams field a total of six 2017-spec 911 RSR.

The race
Since its opening in 2004, the 5.451-kilometre-long Shanghai International Circuit has hosted the Formula One every year. The FIA WEC has featured regularly at the racetrack on the outskirts of the metropolis, which is home to 23 million people. Changing weather conditions in China’s autumn often throws huge challenges at teams and drivers. In addition, the modern facility offers a special feature: The first corner forms the shape of a snail shell, with the radius of the right-hander gradually tightening. This places considerable stresses on the left-hand-side tyres. The track layout was inspired by the Chinese character “Shang” meaning “ascend”. In the 2018-2019 season, the two works- 911 RSR yielded podium results in Shanghai.

The GT Team drivers
Silverstone winners Richard Lietz (Austria) and Gianmaria Bruni (Italy) share the cockpit of the No. 91 911 RSR. The pair currently ranks third in the drivers’ classification. Their works driver colleagues Michael Christensen (Denmark) and Kévin Estre (France) lead the category just two points ahead. The reigning world sports car champions share the No. 92 911 RSR. After the first two races of this season, leads the manufacturers’ classification with a five-point advantage.

The customer teams
In Shanghai, the German customer squad Dempsey-Proton Racing fields three 2017-spec 911 RSR. Sharing the wheel of the No. 77 ca. 510 hp vehicle are Young Professional Matt Campbell (Australia), team owner Christian Ried (Germany) and the Italian Riccardo Pera. Young Professional Thomas Preining from Austria competes with others in the No. 88 sister car. This marks a guest appearance for the No. 78 vehicle. The same crew that contested Le Mans in June 2019 will helm the vehicle: the father-son team Louis and Philippe Prette (Italy) as well as Frenchman Vincent Abril.

Young Professional Matteo Cairoli (Italy) joins forces with Le Mans class winner Egidio Perfetti (Norway) and the Dane David Heinemeier Hansson in the No. 56 911 RSR fielded by the Project 1 customer squad. The No. 57 car is shared by the American Ben Keating and the two drivers from the Netherlands Larry ten Voorde and Jeroen Bleekemolen. Gulf Racing’s number 86 vehicle is manned by the all-British crew of Michael Wainwright, Ben Barker and Andrew Watson.

The 911 RSR
The new 911 RSR (2019 model year) contests its maiden season in the world sports car championship. The vehicle from Weissach, which produces around 515 hp depending on the air restrictor, is based on the high-performance 911 GT3 RS* road-going sports car. Compared to its extremely successful predecessor model, the car for the GTE-Pro class of the FIA WEC received improvements to areas such as driveability, efficiency, ergonomics and serviceability. About 95 percent of the car is new. The 911 RSR is powered by a 4.2-litre, six-cylinder boxer engine.

The schedule
The four-hour FIA WEC race at Shanghai gets underway on Sunday, 10 November, at midday local time (5am CEST).

The race on TV and the Internet
Round three of the FIA WEC season will be shown in full length on www.sport1.de. The free-to-air station Sport 1 will televise live from China on 10 November from 4:55am to 8:00am. The pay-TV station Sport 1+ broadcasts the entire race live from 4:30am to 9:30am. Eurosport also televises the third round live from 4.55am. Motorsport.TV televises the entire race. For a fee, the FIA WEC app offers live streaming and live timing.

Comments before the race

Fritz Enzinger (Vice President Motorsport): “After winning the titles in the North American IMSA series, our works squads can now concentrate totally on the mission with the latest generation 911 RSR. The first two races of the FIA WEC season with the new car has already yielded great results with a one-two at Silverstone followed by the pole position and a podium finish at Fuji. It can continue like this. I’m confident that our experienced team and our top drivers will also get the best out of Shanghai.”

Pascal Zurlinden (Director Factory Motorsport): “We’re leading the manufacturers’ championship after two races and our pairings rank first and second in the drivers’ classification. It’s been a great season so far. However, we still have some tasks on our to-do list. We’ve already learned a great deal about the idiosyncrasies of our new 911 RSR. If we can continue to make systematic progress, then I’m sure we’ll celebrate more successes. We want to finish on the podium at Shanghai – preferably at the very top. After our bad luck here in the past two years, I think we would deserve that.”

Alexander Stehlig (Head of Operations FIA WEC): “After the double victory at Silverstone and second place in Fuji, our goal is clear: to extend our lead in the manufacturers’ and drivers’ classifications. Up to now we’ve been very pleased with our new 911 RSR’s results. Nevertheless, there are still some areas where we can and must improve on. I’m certain that we’ll succeed with this very soon, and I’m really looking forward to a successful outing in China.”

Richard Lietz ( 911 RSR #91): “Last year we finished on the podium, so we’re returning to Shanghai with fond memories. Personally, I don’t mind the changing weather conditions because it adds to the excitement. Our car underlined its very good potential during the first two races of the season, but we’ve not always been able to make full use of that potential. If we can make the most of the possibilities that the new 911 RSR offers then we can go for a top result in China.”

Gianmaria Bruni ( 911 RSR #91): “For me personally, the upcoming race holds a very special meaning. The Shanghai International Circuit is the only racetrack on the FIA WEC calendar where I’ve not yet won. At the previous round in Fuji, we weren’t able to get the most out of the new 911 RSR. In China, we’d like to build on our Silverstone achievement and, if possible, bring home our second win of the season.”

Kévin Estre ( 911 RSR #92): “We still have a score to settle with this racetrack. In the past two years we were in the lead but ultimately we missed out on climbing to the top of the podium. In China, the weather often plays a crucial role. When it rains, it pours. In 2018, the race even had to be halted because of a thunderstorm. I hope we have dry conditions this year. Then we’ll witness a great race in our fiercely contested GTE-Pro class.”

Michael Christensen ( 911 RSR #92): “It feels good to travel to the next race leading the drivers’ classification. We’re at the top because we made the most of the opportunities at the first two rounds of the season. We want to continue like this in Shanghai. The new 911 RSR has great potential. I’m sure that the track in China suits our car better than the Fuji circuit. The signs for another top result look promising.”

Matteo Cairoli ( 911 RSR #56): “Shanghai is one of the toughest circuits on the calendar for me. In dry conditions the tyre wear is enormous. What’s more, the drivers and teams have to be perfectly in sync. At this season’s first two races we didn’t have that crucial bit of luck on our side. I can’t wait to finally climb the podium for my Project 1 squad.”

Matt Campbell ( 911 RSR #77): “I’m really looking forward to the upcoming race. I associate Shanghai with really positive experiences, especially after our victory there last season. In 2018 we saw how much the weather can affect racing. The forecast for this race weekend shows that we have to be prepared for everything again this year. I’m positive that our 911 RSR can be at the very front regardless of the weather.”

In the Sports Car World Endurance Championship (WEC), which was first contested in 2012, sports prototypes and GT vehicles compete in four classes: LMP1, LMP2, GTE-Pro and GTE-Am. They all compete together in one race but are classified separately. The factory squad contests the GTE-Pro class as the reigning world manufacturers’ champions, while the customer teams Dempsey Proton Racing, Project 1 and Gulf Racing fight for honours in the GTE-Am class.

All reports on the previous season can be found in our archive.